A Concert to Benefit the Interfaith Sanctuary Program

First Parish in Bedford – On the Common 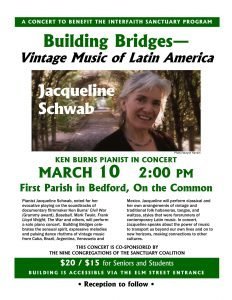 Jacqueline Schwab’s musical sensibilities arose from her time immersed in the rich classical and folk music scenes of Pittsburgh’s “melting pot” and later in Boston. Her signature style is hard to categorize but easy to recognize. Drawing on “the jazz/classical improvisational spirit of Keith Jarrett and the touch of George Winston ….” (New England Folk Almanac), Jacqueline spins musical stories, building bridges to connect listeners to the different cultures and strands that have formed our American music. Her distinctive playing infuses the sound tracks of Ken Burns’ Grammy-winning Civil War, Baseball, Lewis and Clark, Mark Twain, The War, among others. She has performed at the White House for President Clinton, and, with Scottish singer Jean Redpath, on public radio’s A Prairie Home Companion and on CBS’ Late Show with David Letterman. Jacqueline graduated from the New England Conservatory in Boston, majoring in piano improvisation. She has long played for dancing with the Bare Necessities English quartet, whose group improvisational style have inspired new generations of dancers and dance musicians. She has performed in almost every State of the Union. She is married to UU minister Rev. Edmund Robinson and lives on Cape Cod.