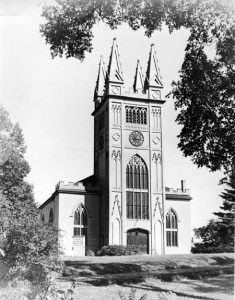 The First Parish of Watertown is one of the oldest congregations in the United States. Puritans, who were seeking religious freedom in England, left there in 1630 on a flotilla of ships with the Arbella as the flagship for the fleet. Those Puritan immigrants settled around the Massachusetts Bay and founded three churches at the center of their communities: Charlestown, Boston, and Watertown. The covenant of the first church in Watertown was signed in July 1630 by about forty members, with Reverend George Phillips as the first minister.

The land on which these Puritans settled was the home of the Pequosette band of the Massachusett tribe, in a place they call Pigusset, which means the meadows at the widening of the river. Indigenous people have lived in the place we now call Watertown for over ten thousand years. 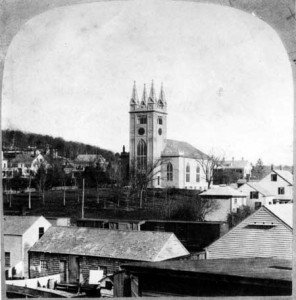 In Puritan times every resident was required to belong to the geographical parish and pay taxes for its support. The Watertown congregation gained a reputation for non-conformity very early in its history when its first minister George Phillips said that churches other than Puritan ones were legitimate congregations, and residents of the community affirmed a revolutionary rallying cry of no taxation without representation. Our present Congregational form of church government owes its foundation to these Puritan times, where the members of each congregation, in democratic fashion, have authority over property ownership, membership rules, and the call of the minister.

The First Parish of Watertown has worshipped in eight different meetinghouses since 1630. The first building was constructed near present day Mt. Auburn Hospital in Cambridge, where the original Watertown settlement was located. Subsequent meetinghouses included sites at the corner of Arlington and Mt. Auburn Street, on Hillside St., at the top of Common Street. In 1755 a fifth building was erected at the bottom of Common Street on Mt. Auburn Street. This structure became the meeting place for the Provincial Congress during the American Revolution, when Watertown was the capital while Boston was occupied by the British. The four corners of this meetinghouse are marked with stone posts in the Common Street Cemetery.

The sixth, seventh, and eighth buildings have all been located near the corner of Church and Summer Streets. After the separation of church and state in 1833, the old Parish Church was required to separate from the town, and it built a new church, now officially Unitarian, in 1836. This structure burned and was replaced in 1842. In 1889, the church built a new parish hall called “The Unitarian Building,” designed by Charles Brigham. This building was converted into a church when the old wooden Gothic building (1842) was torn down in 1975, after the church had declined in numbers. Capital fund drives in 1996 and 2003 enabled the congregation to construct an accessible addition to the building with an elevator, install structural steel supports, and remodel the sanctuary to ensure the preservation of this historic structure.

Known for non-conformity in its early years, the First Parish of Watertown was guided into the Unitarian faith during the ministry of Convers Francis. Francis was active in the Transcendentalist movement, and a friend of Ralph Waldo Emerson. He became the mentor of famed preacher and abolitionist, Theodore Parker, who taught school here in Watertown. Francis sister was the abolitionist and writer Lydia Maria Child, who is best known for her Thanksgiving poem which begins, “Over the river, and through the wood…” Francis was followed in the ministry by John Weiss, another abolitionist preacher. Weiss was one of the first theologians to follow a scientific naturalism for his faith. He was also the founder of the Free Public Library of Watertown.

The 20th century brought many demographic and religious changes to Watertown, and the congregation declined, while the meetinghouse fell into disrepair. Thanks to the work of Helen Robinson Wright and others the congregation refused to die. Wright’s memory is preserved in a fund that assists non-profit organizations and individuals in need. One of the better known ministers from the 1960s, David Rankin, helped revive the church, and also hid draft dodgers in the parsonage attic during the Vietnam War. In the meantime the Unitarians consolidated with another liberal religious movement, the Universalists, in 1961. After the present meetinghouse was converted from a parish hall, the congregation experienced slow but steady growth. Much of this was achieved after the church called its first woman minister, Andrea Greenwood in 1992, who later served as co-minister with her husband, Mark Harris. The congregation celebrated its 375th anniversary in 2005 in a beautifully refurbished sanctuary. 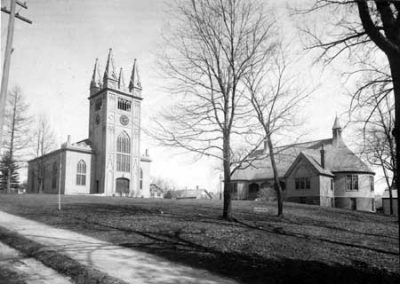 Seventh Meetinghouse of First Parish (1842) and the Unitarian Building (1889) 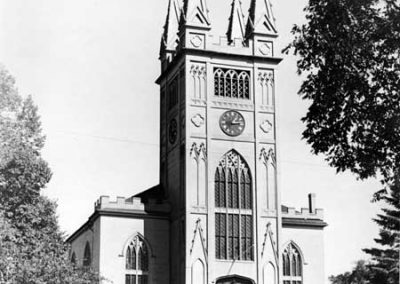 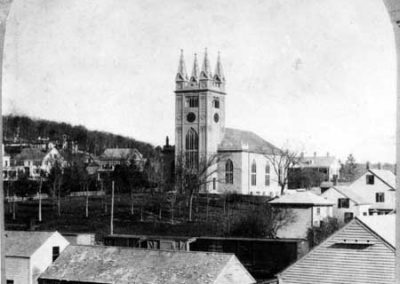 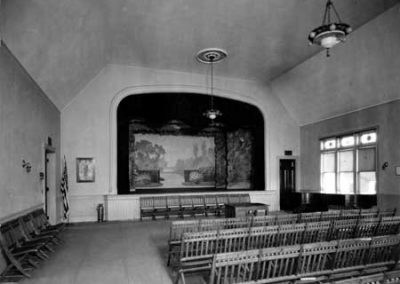 Mark Harris. “The Development of Congregational Polity and Early Governance in Watertown, Massachusetts.” Charter Day Talk. September 23, 2009.
Mark Harris. “From Revelation to Reason to Intuition to Freedom: The Development of Unitarianism in America—A Local Perspective.” A paper given at the Reasonable World Conference on September 18, 2011 in San Diego, CA.
Mark Harris. An Ancient Church: A History of the First Parish of Watertown, Massachusetts. Watertown: The First Parish of Watertown, 2019.
David Russo. Charles Brigham biography.

The church silver of First Parish Watertown is on deposit at the Museum of Fine Arts, Boston.

The main body of Church Records, 1668-1981 has been transferred to the Massachusetts Historical Society, where it is available to researchers.

The personal papers of Reverend Convers Francis, including his handwritten sermons, are in the local history collection of the Watertown Free Public Library. Many of his sermons have been digitized by the library.